Stephen Hawking Said the Earth Will Cease to Exist in 200 Years, Here Are Our Options

The most famous scientist since Albert Einstein, Stephen Hawking, is widely known for his groundbreaking works in physics and cosmology. Hawking learned how to read at the age of 8 years old and was quite a lazy student at his university, but at the age of 21 he completely changed his worldview due to his illness and devoted his entire life to cosmology. In his brilliant theories, the scientist tried to explain how our universe works in a very profound way — although, sometimes his views about the future of Earth and humanity were extremely pessimistic.

At Wonder Ideas, we have gathered some of the most terrifying things predicted by Hawking that explain how and when our world will end.

The certified genius said that one of the greatest threats to mankind wasn’t coming from the cosmos but rather from what people were creating themselves.

A long time ago, scientists started to toy with genetically engineered viruses to treat human illnesses, but they discovered other possible applications for them. For example, researchers creating a virus that could kill cancer cells found out that it could also reduce the urge to drink by introducing it into neurons that control the behavior of an addicted person.

Nowadays, pharmacists also combine several deadly viruses into a single shot and even mix DNA from people, cows, and dogs. The problem is that we still don’t fully understand the long-term damage from these recombinant vaccines, and we certainly don’t know what effects they can have on us.

6. Aliens will invade our planet.

Hawking believed that there were other forms of life in the cosmos and that they were not friendly ones.

In 1983, Hawking along with James Hartle devised their “no-boundary” theory which described how the Earth hurtled into existence during the Big Bang. Later on, the idea was developed into Hawking’s “multiverse” theory. According to the theory, our cosmos is only one of many separate universes created by a number of other “Big Bangs”.

Although there is still no evidence proving that we are not alone in the cosmos, there is a high possibility that aliens would like to smash other living beings into atoms.

5. The universe will come to its end.

In his final work, A Smooth Exit From Eternal Inflation completed two weeks before he died, Hawking predicted that our universe would eventually fade to darkness as all the stars would run out of energy. That’s why in his opinion, we desperately need to get to other universes as soon as possible if we want to survive.

Although Hawking’s life itself depended on artificial intelligence, he didn’t trust it at all. Once he said that it could be the “worst invention of the history of our civilization” as it may replace humans altogether.

Despite AI’s current usefulness, he warned that further development of these technologies could be a fatal mistake if we weren’t mindful of the risks it could bring to us. “Once humans develop artificial intelligence, it will take off on its own and redesign itself at an ever-increasing rate,” he predicted. In that way, this new form of life could outperform humans. 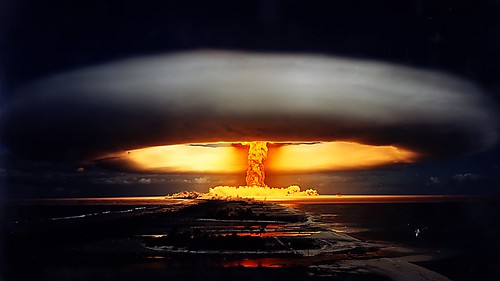 In Hawking’s opinion, aggression and irrational behavior are the worst human traits that we ought to get rid of. However, there is no sign of conflict lessening nowadays, and the development of militarized technology and weapons of mass destruction could lead us to disastrous consequences which would mean the end of our world.

2. We’ll need to find another planet to live on.

According to Hawking, we have to find another planet to live on within 100 years, otherwise, we will die out as our planet has already “reached the point of no return.” To save ourselves from such problems as huge population growth, pollution, deforestation, and pandemics we have to become a multi-planetary species and discover new worlds.

Here are possible Earth doppelgangers that could be inhabited in future:

1. The Earth will turn into a fireball.

The great mastermind also predicted that our planet would become a fireball in less than 600 years. By that time, Earth will be so overpopulated that our energy consumption will make the planet burn red and the human race will perish.

Hawking added that global warming would make the conditions on Earth similar to Venus, where the average temperature is about 250 degrees Celsius, sulphuric acid would often rain from the sky, and there would be wind speeds up to 100 meters per second.

The physicist said, “Climate change is one of the great dangers we face and it’s one we can prevent if we act now.”

This Woman Was Caught Red-Handed While Dumping Her 4 Dogs, And Got What She Deserved

33 GIFs of Products That’ll Make You Want Them Immediately